Sounds and Words to Heal the Body, Mind and Spirit 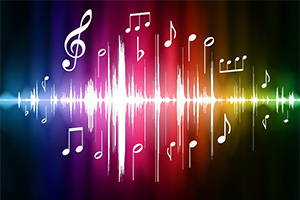 The use of sound for healing tool goes back thousands of years. But recently the use “sound healing” has gained a lot of attention, as practitioners promote the healing benefits of music, tones and instruments. Jonathan Goldman, director of the Sound Healers Association, is one of the leading experts in the field.

According to Goldman, modern science has finally caught up with what the ancients have long known—that everything is in a state of vibration, from the electrons moving around the nucleus of an atom, to planets and distant galaxies moving around stars. And as all of this around us is moving, it is generating vibration which can be heard as sound (of course some vibrations can’t be heard). So everything is creating a sound, including the floor you’re standing on, or the chair you’re sitting in, even our own bodies. Every organ, every bone, every tissue, every system of the body is creating a sound.

When we are in a state of health, we’re like the most beautiful orchestra playing a symphony of music. But what happens if one of the players is a little off? He or she starts playing out of tune, and pretty soon the entire orchestra is affected. This is a great metaphor for how disease starts in our bodies. What if we could somehow point a healthy vibration at the part of the body that is vibrating out of tune so that it returns to normal, healthy condition? This is what’s behind using sound as a healing approach. 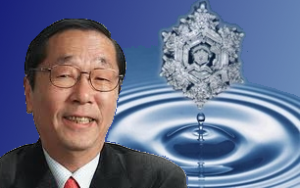 Words are of course sounds, and as such have tremendous power because they are sounds that are uttered with intention. The ancient medical texts in India have long believed that each word has a unique vibration. More recently, Japanese scientist Dr. Masaru Emoto has shown the potent effects of sound, in particular spoken words, by photographing water crystals. His work is published in his series of books called Messages from Water. In his remarkable experiments, he played classical music and folk songs from Japan and other countries through speakers placed next to water samples. He then froze the water to make crystals and compared the crystalline structure of different samples. With each musical piece, the water sample formed different and beautifully geometric crystals. When he played heavy metal music, the water crystal’s basic hexagonal structure broke into pieces. In another experiment, Dr. Emoto taped various words and phrases to jars of water. Afterward, he photographed the crystals that formed when these water samples were frozen. Words or phrases such as, ‘thank you,’ ‘love/appreciation’ and ‘love thyself’ produced a variety of beautiful geometric forms. On the other hand, phrases such as, ‘you make me sick’ or ‘you fool’ produced crystals that were disconnected or chaotic.

The implications of these experiments are remarkable. Since our bodies are made up of 70 percent water, we would seem to be greatly affected by words spoken by others, just as De. Emoto’s water was. So in order to heal the body, we need to pay attention to what we hear and what we say. Imagine what your words are doing to others and to you. 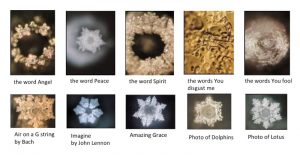