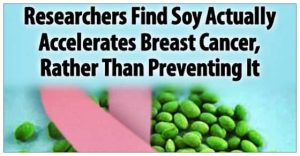 Previous reports by several scientists in both reputable publications and cancer foundations have stressed the importance of soy to reduce breast cancer. Meanwhile there has been plenty of research to contradict these claims and completely oppose them. Researchers at the Memorial Sloan Kettering Cancer Center in New York studying invasive breast cancer are warning women that adding soy to your diet will speed up the rate at which breast cancer cells spread.

The Chinese did not eat unfermented soybeans as they did other legumes such as lentils because the soybean contains large quantities of natural toxins or “antinutrients”. First among them are potent enzyme inhibitors that block the action of trypsin and other enzymes needed for protein digestion.

These inhibitors are large, tightly folded proteins that are not completely deactivated during ordinary cooking. They can produce serious gastric distress, reduced protein digestion and chronic deficiencies in amino acid uptake. In test animals, diets high in trypsin inhibitors cause enlargement and pathological conditions of the pancreas, including cancer.

Accelerates The Progression of Breast Cancer

Researchers at the Memorial Sloan Kettering Cancer Center compared tumor tissues from before and after a 30-day regimen of consuming a soy supplement while a control group took a placebo. They found changes in the expressions of certain genes, that are known to promote cell growth, in those women taking the soy supplement.

The findings led them to conclude the soy protein could potentially accelerate the progression of the disease. The study states: ‘These data raise concern that soy may exert a stimulating effect on breast cancer in a sub set of women.’

Thousands of women are now consuming soy in the belief that it protects them against breast cancer. Yet, in 1996, researchers found that women consuming soy protein isolate had an increased incidence of epithelial hyperplasia, a condition that presages malignancies. A year later, dietary genistein was found to stimulate breast cells to enter the cell cycle – a discovery that led the study authors to conclude that women should not consume soy products to prevent breast cancer.

“It’s a myth that soy prevents breast cancer,” says Kaayla T. Daniel, PhD, author of The Whole Soy Story: The Dark Side of America’s Favorite Health Food. “Numerous studies show that soy can cause, contribute to or even accelerate the growth of cancer.”

All those taking part in this study had recently had breast biopsies and were diagnosed with stage one or two breast cancer. They were all scheduled to have a mastectomy or lumpectomy two to three weeks later.The researchers said it is not yet clear if the effects can be reversed.

Vegans and Vegetarians At Risk

Of the women with high genistein levels, a few of them experienced changes in a specified set of genes that are known to affect breast cancer cell growth, death, or some aspect of breast cancer pathology, Dr. Jacqueline Bromberg, co-author of the study said.

The changes were seen in women who consumed around 51.6 grams of soy – the equivalent of about four cups of soy milk a day.

The researchers concluded those who eat soy regularly could ‘reasonably consume that amount’ through the course of a day, particularly vegetarians and those who do not eat dairy products.

They warned those living in Asian countries could be especially at risk, due to the high levels of tofu and soy in traditional diets.

‘We’re talking about something that a person could eat.’

A 1998 survey found that the average daily amount of soy protein consumed in Japan was about eight grams for men and seven for women – less than two teaspoons. Americans are consuming amounts far exceeding this quantity.

Any ingredient listed as soybean or soy on any product ingredient list has a 93% chance of being GMO if it is not listed as organic. But even organic soy cannot be trusted. Soy is very problematic crop. Non-organic sources of soy in many agricultural practices are being passed off as organic.

In 2011, the USDA uncovered a plot to import fraudulent organic certificates produced by an uncertified supplier in China. The Chinese firm used the counterfeit certificate to represent non-organic crops, including soybeans, millet and buckwheat, as certified organic. These types of things are happening every year and only a fraction are being discovered. Even domestically sourced organic soybean crops are now being investigated for having GMO origins. Organic soy also does not change the toxicity of unfermented sources so abundant in the food supply.

Most Soy is Unfermented

Phytates in unfermented soy products actually obstruct absorption of protein and four key minerals: calcium, magnesium, iron, and zinc better than fermented sources. In their natural form, soybeans contain phytochemicals with toxic effects on the human body. The three major anti-nutrients are phytates, enzyme inhibitors and goitrogens. These anti-nutrients are the way nature protects the soybean plant so that it can live long enough to effectively reproduce. They function as the immune system of the plant, offering protection from the radiation of the sun, and from invasion by bacteria, viruses, or fungi. They make the soybean plant unappetizing to foraging animals.

All plants have some anti-nutrient properties, but the soybean plant is especially rich in these chemicals. If they are not removed by extensive preparation such as fermentation or soaking, soybeans are one of the worst foods a person can eat. The net protein utilization of unfermented soy is 61 which quite low. The most common soy (99%) sold at major grocery retailers in soy milks and processed foods is unfermented soy. It is deadly.

Fermented sources of soy such as natto, miso, tempeh and some fermented tofus are likely the only types of soy that should be consumed by humans and that’s only if you can get around the crap shoot that they’re non-GMO and organic (which there is no guarantee despite labeling).

When food is eaten, digestive enzymes such as amylase lipase and protease are secreted into the digestive tract to help break it down and free nutrients for assimilation into the body. The high content of enzyme inhibitors such as trypsin in unfermented soybeans interferes with this process and makes carbohydrates and proteins from soybeans impossible to completely digest.

Natasha Longo has a master’s degree in nutrition and is a certified fitness and nutritional counselor. She has consulted on public health policy and procurement in Canada, Australia, Spain, Ireland, England and Germany.