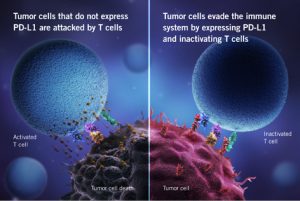 Another instance of the “miracle drug” Nivolumab has literally saved the life of a terminally ill cancer patient in the UK who was given just two weeks to live.

The patient, Simon Lamont-Brown, 50, was in a hospice and near death from lung cancer. Lamont-Brown was diagnosed with lung cancer in February last year after visiting his GP with a hoarse voice. Scans showed he had lung cancer that had spread, to his vocal cords and lymph nodes. He had five rounds of chemotherapy which stopped being effective last July. His health then went rapidly downhill. His specialist gave him two weeks to live and he was sent to a hospice.

Lamont-Brown was reported by the British newspaper the Daily and Sunday Express as saying: “I could hardly walk, I was so debilitated by pain even though I was on morphine. One of the worst moments was a day when the nurse asked me if I wanted to go for a walk – she helped me get up. I got 10 yards but had to ask her to take me back as I couldn’t go any farther.”

However, his specialist suggested he tried the Nivolumab. He had his first course on his 50th birthday last August. After a second he started to feel better and asked to go home.

“I couldn’t believe it,” he said, “I had told my friends I needed a miracle and I’ve had one.”

Days later he was well enough to go home and after 10 months regular scans showed his tumor had shrunk dramatically. The father-of-one says he is now “feeling fine” and “living a normal life.” He added: “My oncologist called it ‘the Lazarus effect’ because I just rose from the dead.”

But Lamont-Brown only received the drug because it was paid for by his private healthcare insurance. Nivolumab has had “remarkable” success fighting end-stage lung cancer in trials, experts say. It is also effective against other cancers.

However it will not be provided in the UK by its government medical system because it costs too much. The UK-based National Institute for Clinical Excellence has decided not to approve it for immediate use in England. Lamont-Brown speaks openly about his at this ruling. “What price is a life? The fact that I was able to use this drug is tinged with guilt because I know other people with lung cancer will not have the same chance as I did. It should be made available to everyone who could benefit.”

Lung cancer expert Professor Dean Fennel, of the University of Leicester, said: “The scientific benefit of this drug is unquestionable for all patients and for some the effects were remarkable.” And Paula Chadwick, chief executive of lung cancer charity, the Roy Castle Foundation, said: “Nivolumab represents real hope. “We strongly urge dialogue between the manufacturer, Nice and NHS England to ensure cost issues are addressed.”

Pharmaceutical company Bristol-Myers Squibb, which created the drug, has offered to pay for Nivolumab for patients after they have been funded by the NHS for more than a year.