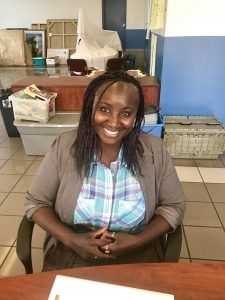 Hajah is a 39 year old woman who currently lives in San Francisco, CA. Hajah moved from Africa in 1997 so that she could pursue her dream of attending law school. Hajah was diagnosed with breast cancer in August of 2016. She is currently going through radiation, after having a lumpectomy to remove the tumor. For Hajah this wasn’t the first time she had been diagnosed with a medical condition. 10 years prior she suffered from blood clots that collapsed both of her lungs, hospitalizing her and keeping her on life support for a week. Miraculously she recovered.
Shortly after her hospitalization she conceived her only son, who is now 11 years old. In Africa she had developed cists on her ovaries and one had to be removed, so the chances of her ever having a child was slim. The pregnancy came as a shock to her, but she was filled with joy. Due to her medical condition with clots her doctors recommended her terminating the pregnancy. Hajah refused and was told by her doctors that her pregnancy would most likely fail on it’s own and could result in her death. Despite all of this Hajah continued her pregnancy, resulting in her confined to a wheelchair and multiple hospitalizations. Despite it all, she delivered a healthy baby boy.

Hajah was recruited to work at the Progress Foundation where she helps women going through all different types of issues, as she is now a licensed counselor. Hajah is determined to get through her cancer treatments and continue her career in helping people, especially women with breast cancer.

About the Author: Kelli Murphy