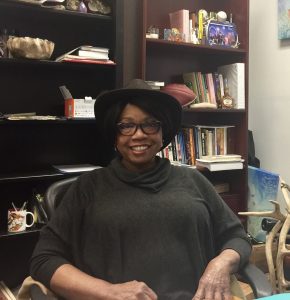 Aleta is a 59 year old woman living in Oakland, CA. Aleta has been working as a chef/caterer for the past 30 years in San Francisco. She was used to a face paced work environment and being on her feet for hours on end, so when she started losing her breath easily and felt the need to get an inhaler, she knew something was off. Walking into a doctors appointment thinking something minor was taken place, she was shocked to discover what was going on. Aleta was rushed from imaging to the emergency room so they could drain 1.7 liters of fluid from her lung. Upon further testing they confirmed the worst, that Aleta had stage IV ovarian cancer and it had metastasized in her lung.

For those of you who don’t know, Ovarian cancer is one of the most difficult cancers to diagnose. Aside from skin cancer, most cancers are not detected until it has metastasized and a tumor can be felt, which can happen at any stage. With ovarian cancer there are almost no symptoms or tumors that can be felt until it has spread and metastasized in another area, and at this point, will be diagnosed as stage III, and more commonly, stage IV, terminal. With ovarian cancer, a later stage diagnosis drops the 5-year survival rate from 90% to 30%.

Despite all of this, Aleta came to us with a go-getter attitude and one of the most uplifted spirits we have ever seen. She expressed her biggest need as finding a place to live, upon hearing about her diagnosis her landlord asked her to move, stating he didn’t want a sick person living in his home. Despite hearing the news, Aleta heard it as a blessing, as a sign that she needs to be in a positive environment, so that she can heal.

Aleta has undergone multiple chemotherapy treatments, as well has undergone a full hysterectomy. She is focused on healing so that she can get back to work, desperate for her insurance to continue through her employer. The Love from Margot Foundation has given her the largest financial grant possible in hopes that it will lead her to a new home where she can thrive in positivity and love.

About the Author: Kelli Murphy